finds a ready market in the Metroplex

Special to the Star-Telegram

For Mikhail Frumkin, leaving his Russian birthplace and settling in Texas didn't mean giving up everything. Starting as a draftsman almost 20 years ago, he owns the Russian Island gift shop, offering about 700 items from Russia.

"I'm the largest retailer of Russian made products in the country, " he proudly said.

Frumkin, 51, was a civil engineer in the former Soviet Union who supervised 50 engineers. But his brother had chosen to immigrate to the United States and was living in Dallas, so Frumkin followed, although he knew little English.d

In Russia "you were not able to grow," Frumkin said. "It's hard to work when you have pressure to perform and act a certain way all the time."

In the United States he became the first employee for the new engineering firm DeShazo and Tang.

"It was very awkward in the beginning," firm Principal John DeShazo said. But Frumkin became licensed in three states. He was an engineer again. But he wasn't going to sit back and take it easy.

"He's the most enterprising person I know," DeShazo said. "He was a very good employee, and I regretted seeing him leave."

Russian Island was created after Frumkin helped supply Russian products to sell in a museum shop when the Catherine the Great exhibit came to Dallas in 1992.

Their popularity encouraged him to go into business himself in Arlington, where he lives. He opened a small kiosk at The Parks in Arlington shopping center, where the merchandise sold well. In 1993, he opened two stores, one at Hulen Mall and the other at the Galleria in Dallas, in addition to selling from a warehouse in an industrial park off South Cooper Street.

But trying to stock and operate two new stores proved too costly and time consuming. After a year, he closed the Hulen Mall store and focused his efforts on the Galleria store, where he has added a cafe. He still does business from his warehouse in Arlington.

The first few years were tough, as they are for many new businesses, Frumkin recalled.

"It took three years before I made any money," he said.

The cafe had a 30 percent increase in sales last year. The gift shop and cafe together employ seven people

Being a native Russian is a major asset, he said.

"I can buy something two times cheaper than an American trying to buy it," he said "I know the cost and I don't need to rely on any middleman."

At Russian Island, he sells popular items such as hand-painted nesting dolls from $5 to $3,000. The nesting dolls range from having three inside to 30.

"Christmas sales were stable," he said. "I can't say what item is best. It's very strange."

When he started out in business, he looked at sales like an engineer, checking the facts, "but an item will sell one month and not the other, but the it might sell even better a few months later."

The store sells more than new items. He imports and sells icons made in 17th, 18th and 19thcenturies. Those religious carvings, which are becoming rarer, run in price from $595 to as high as $7,000. He also has some 20th-century copies.

Keeping items in stock is a problem. It takes about six moths to get an order together so that a container can be shipped by sea. Soon after one order has been shipped, he must begin ordering merchandise to fill the next container. He manages to keep shelves stocked and said he had gross sales of more than $500,000 in1997.

To help educate Americans about Russia, he offers tours of his store. After the tour, he serves them lunch in his cafe and gives each student a pin to wear.

Hoping to extend his store's reach outside the Metroplex, he plans in a few weeks to make his merchandise available on the Internet, for worldwide delivery. Frumkin hired a photographer to photograph the store's entire contents. However he thinks he might have gone a little too far, and decided to feature pictures of only 400 items when the web site comes online.

Frumkin said he is always looking for other business opportunities. Last year, he created a translation service for American business people who deal in Russia. He coordinates bilingual Americans to provide technical translations and correspondence service.

Frumkin is also trying to put his engineering skills to use and said he hopes to make a deal with the government to redesign the congested traffic system in Moscow. 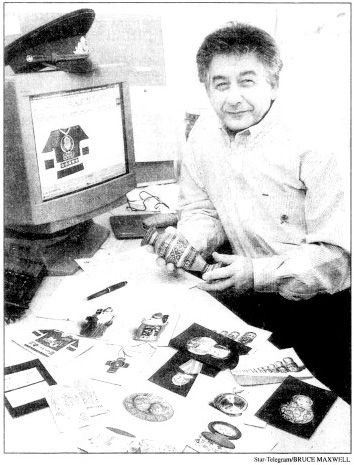